Previous experience as a coach or played and familiar with the game of football disciplines is preferred. Beginning in March 2014, this 3 1/2 month position. Responsibilities include assigned duties by the Head Coach encompassing all aspects of the Football programs, as well as duties assigned by the (GWCA) athletic department. Passionate, creative, hard-working individuals are encouraged to apply at www.12ManFootball.co
Salary: $1258 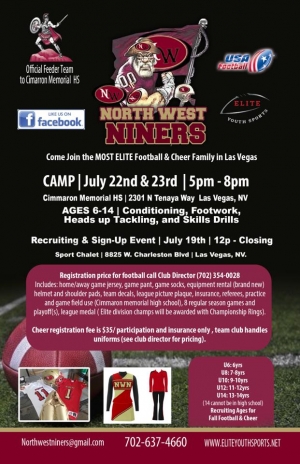 The Nortwest Niners are holdling a pre-season camp @ Cimmaron high school from 5pm to 8pm on Monday July 22nd, 2013. Ages range from 6-14 (14 year olds can not be going to high school) for football and cheer. See Flyer for Further Details...

Come join the best coaches in Vegas. Train like the Pros with the Vegas Thunder! Team is for kids in 4th-8th grade... Individual training available for all ages!

Managers can only bring 8 players to a team...

Congratulations to All the District 4 Little League Champions

The Nevada District 4 Champs Are:

Little League Division: Mountain Ridge LL (they won it all in 2010 and went to San Bernardino (Western Regionals) at this level and are looking to go all the way to Williamsport. This group of kids has won State Titles at 9/10's, 10/11's and now Little League (Major) division.)

9/10 Division: Cheyenne LL (They won in this division last year and returned 3 players to the team. Cheyenne has won 3 of the last 6 State Titles at this level... looking for 4 in 7 years)

Junior Division: Western LL (This is their 1st District Title at any level in at least the last 15 years and their 1st as a member of D4)

Senior Division: Mountain Ridge LL (3rd year in a row they have won this division. They were the only League to field a team in Seniors for D4 and thus won without having to play against any opponents.) 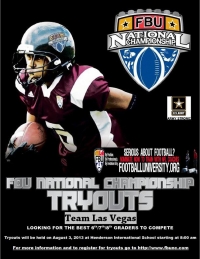 We are looking for the top football players going into the 6th, 7th, and 8th grades. The next tryout for the FBU Team Las Vegas All-Stars will be held 8am on August 3rd,2013 at Henderson International School, cost is $35 and includes t-shirt.

Please arrive a half hour early for registration. See flyer for additional information...

Mountain Ridge All Stars jumped out to an early 2-0 lead in the bottom of the first with a two-run blast by Branson Tressler, scoring Landon Hare started the inning off.

Cheyenne All Stars would pile on 12 runs in the top of the third. A bases loaded walk scored Dominic Mercado to get Cheyenne on the board for the inning.

The teams banged out a total of 15 hits between them, as well as five for extra bases.

Mike Cianci racked up four RBIs on two hits including a 3 run home run for Cheyenne.

Garret Baker got the win for the Cheyenne All Stars despite allowing six runs over 2 2/3 innings. G. B. struck out five, walked four and gave up four hits.

Cheyenne All Stars closer Chance Mancilla put away the final four outs to record the save.

Manager Mike Cianci stated "Cheyenne Little League is very proud of our team. The kids played hard every game and showed heart in coming back in 2 games when they were down. Great job goes out to both the players and the coaches! Keep it up as we play for the State Championship."

Cheyenne 9/10 All Stars now move on to the state championship where they will face the District 1 Champion Washoe County on July 19th. The tournament will held in Las Vegas this year. Opening Ceremonies will take place on July 18th at Mountain Ridge Park (7151 Oso Blanca Rd). The Cheyenne 9/10 All-Stars ended the tournament 5-0 with 75 runs scored and only 15 runs allowed.

New 13U Club Baseball team looking for three experienced and coach-able players for the upcoming season.

We will be participating in Fall Ball and all local tournaments. Low dues just to cover field permitting fees. Practice is three times per week in Henderson and Southwest Las Vegas. Experienced coaching staff.

Looking for Football and Cheerleaders in the North Las Vegas area. Come check out our Team the LV DUCKS! We play in NYS.

Sign up today online for 49ers football/cheer team 6-14 year olds Nyfl Lv 49ers atwww.gonyfl.com use PROMO CODE for 49ers
JR23DLE465DJXZZ35 This month discount is $155 Instead of 180 with ^ promo code rosters filling up fast for fall remember there is kids that only play fall ball with us 1st Official practice is August 1 as rosters are half way full now on each Division don't miss out!!! We are more then a team we are family sign up today!!!

The Northwest Niners are proud to present our Registration sign up event at Sports Chalet located @ 8825 W.Charleston Blvd Las Vegas, NV 89117 July 9th from 12 noon to 8:00pm. We are still recruiting ages 6-14 for FOOTBALL and CHEER. We also have Coaching positions open, team moms, and room for any teams that would like to merge (only if interested) in becoming part of something special. If you have any questions please contact Director Zo @ (702) 354-0028. FAMILY, DEDICATION, COMMITMENT, and COMMUNICATION. LETS RIDE!!!!

Published in Archive
Tagged under
Read more...
Page 5 of 18