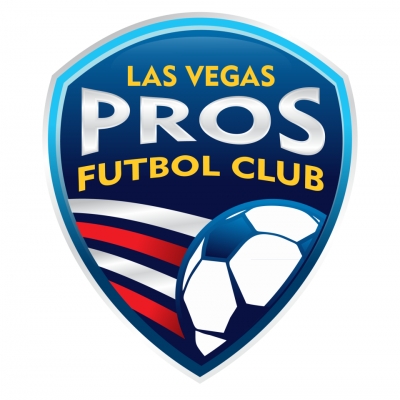 Las Vegas Pros Fútbol Club will be holding our tryouts the first ten days in June. We will use our facility in Summerlin throughout the entire tryout process.

Our facility is located at:

If you would like to bring an entire team, please contact Greg Howes at greg@proslasvegas.com for a private evaluation. 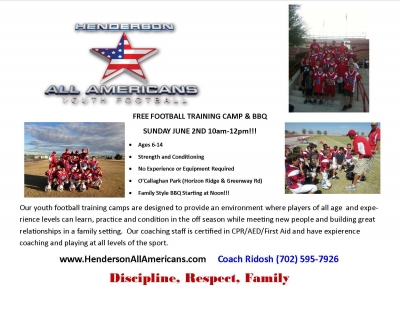 The Henderson All Americans Youth Football Team are having a FREE Football Training Camp on Sunday June 2nd from 10am-12pm followed by a family style BBQ. All players 6-14 years old are welcome. No equipment or experience is needed. O’Callaghan Park is located in Henderson on the corner of Horizon Ridge Pkwy and Greenway Rd. just off the 95. Contact Coach Ridosh at 595-7926 or www.facebook.com/coachryan.ridosh. See Flyer for More Details... 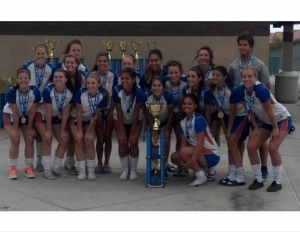 Congratulations to Heat FC 96 EM on their 2013 Under 17 Girls Division State Cup Championship. They won both of their games and kept a clean sheet, allowing zero goals against. Great job by the players and Coach Esad Morina! 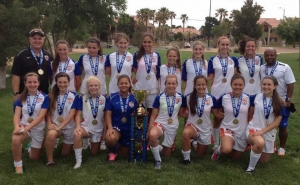 Congratulations to Heat 98 MB on their impressive victory in the U15 State Cup Championship! They had an impressive semi final 1-0 victory over defending champions LV Neon. They then had an exciting win over LV Premier 4-3 in the final. Congratulations girls and coaches. Great win, way to make the club proud!!!

Lead by Head Coach Richard Moles, Assistant Coach Jeff Eisenhart and Technical Trainer Lenin Steenkamp, the Heat FC 01 RM U12 girls team won the 2013 Nevada State Championship earning the opportunity to represent Nevada in the US Youth Soccer Far West Regional Championships to be held this June in Hawaii. During the weekend tournament, the girls continued their possession minded game holding their own on the pitch as they found the back of the net four times while allowing only one goal. Please visit the team web page,www.hfc01.com, for updates as we ready for Hawaii. Great job players and coaches, we are all proud of you! 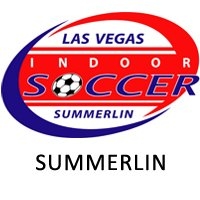 Sign up before May 10th and get the Early Bird Discount
ONLY $110 for 10 game season
... Includes Coaching, weekly clinic practices, and Team Shirt
**with valid LVIS membership** 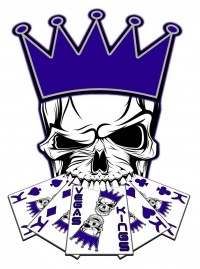 We are currently LOOKING for 2 Experienced Competitive Players to join our program.
Practices are held on the Southwest part of town.

We have an experienced NON-DADDY COACH on Staff along with a Professional Baseball Instructor who runs clinics for our team. Our Team is currently finishing up in the Spring LVBA Wood bat league and we are looking to add Players to our program for the Summer and Fall Season.

We also have plans to play in LOCAL, SELECT UTAH and ARIZONA TOURNAMENTS FOR THE 2013-2014 season, Along with Playing in the Competitive Fall Ball Club League.

To Schedule A Private confidential TRYOUT or to find out more about our program, please email us at LasVegasKings@ymail.com 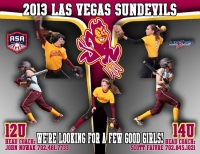 CONGRATUATIONS ON YOUR HIGH SCHOOL SEASONS! We wish you all the best of luck in the post season!

Attention Freshman: We are looking for 2 girls with birth year 1998 to play with our 14U team for the remainder of the 2013 year. If you are interested in playing, please contact Coach Scott at the number listed above

Pitch, Hit & Run is the Official Skills Competition of Major League Baseball. This grassroots program is designed to provide youngsters with an opportunity to compete - free of charge - in a competition that recognizes individual excellence in core baseball/softball skills. Competitors are divided into four age divisions: 7/8, 9/10, 11/12, 13/14, and have the chance to advance through four levels of competition, including Team Championships at Major League ballparks and the National Finals at the 2013 MLB All-Star Game.

CONGRATULATIONS TO OUR PLAYERS OF THE WEEK!

6U - Isalia Minnalez, Lil' Spirit. Isalia was unstoppable on the bases. She had 4 put outs and went 3 for 3 with a triple! During the Hawaiian Jamboree, Isalia was first in the run event and second in the throw event. Awesome stuff, Isalia!

8U- Nicole Pannucci, Pink Sox. Nicole dominated the circle this week pitching 3 scoreless innings with no hits, 8 strike outs and only walking one batter. At the plate, she reached base at each at-bat with a walk and a single that scored two runs. Nice work, Nicole!
10B - Tatum Huntley, Rebels. At the plate, Tatum had two doubles while driving in one RBI. While catching, she threw out a runner attempting to steal second and tagged a runner out on a play at home. She did not allow any runners to score on passed balls, even while bases were loaded. Terrific job, Tatum!

10C - Mia Batiste, Drama Queens. Mia had a great all-around week of softball. Mia showed off her power at the plate going 3 for 4 with a bullet of a homerun. She had four RBI's and scored 2 runs. While playing first base, she had four put outs. Fantastic job, Mia!

12B - Brooke Beaman, Juiced. Brooke had 4 put outs and 2 catches at 2nd base. She also tracked a fly ball deep into center field for another out. Brooke added 4 RBI's from the dish helping her team to two victories this week. Great job, Brooke!

14U - Mariah Rinker, Juiced. Mariah hit her first career homerun with a hit to the top of the scoreboard driving in 2 runs. She also added 3 singles, 1 double and a walk. Behind the dish, she gave a solid performance with a foul ball catch high above the plate, 2 throw downs to 1st, and 1 to 2nd base picking off the runners. Mighty stuff, Mariah!

16/18- Brooke Wallack, Stingrays. Brooke was on fire in the circle this week with 14 strik outs. She helped her team take three wins this week. At the plate, she was 4-7 with 2 doubled and a single. She also scored 3 of the 4 times she was on base. Way to go, Brooke!

$250 entry fee with free set of Dry-Fit Jerseys for the winner. You buy Mulligans, Homeruns, Unlimited Runners and Money Balls (Prices will be listed at the tournament)

Last year was a blast and we hope to have as good of a turn out as last year!

On their first game they played their local rivals Vegas All Boys. Both teams have some outstanding talented players and both teams bring great energy to the game whenever they play each other but Heat FC 04 was much stronger in this match-up winning the game with a score of 2-1.

In their second game they met a great team from Southern California, Man United. The Heat boys were super strong in their first half and scoring 4 goals and conceding two but the game is about two halves. Man United was attacking very strong in the second half. This game became very exciting with lots of chances on both ends. After a very dramatic second half the game ended up with a score of 4 to 4. Both teams played some great soccer.

After Man United ended up winning against Vegas All Boys with score of 2-1, Pool play ended up in a dead tie causing the Heat boys to need a win in their final pool play game by more than 13 goals in order to advance based on points. The boys were ready for the challenge and they did it.

In the final game they end up meeting Golden State 03-04 from Southern California. The boys continued to play some great soccer and were outstanding on every part of the field. They ended up winning the championship with a score of 5-1. Coaches are proud of the boys and proud of this age group that has been representing the club on every event to the highest level.

Published in Archive
Tagged under
Read more...
Page 8 of 18