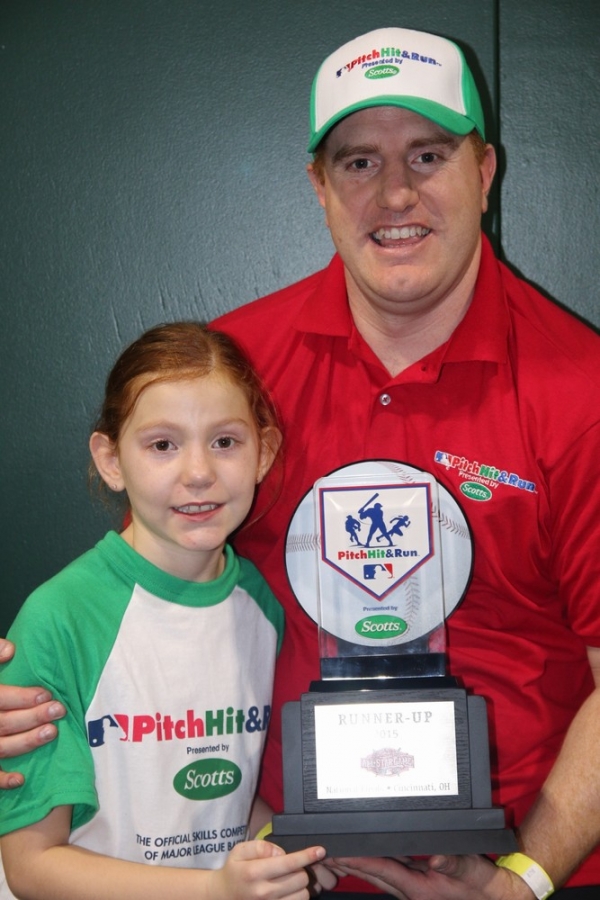 Local 8-year-old female Mya Bartlett from Las Vegas took 2nd at the MLB Pitch-Hit-Run competition in Cincinnati last Tuesday. She was one of only three girls in the nation in her age category invited to participate in the finals.

Mya is coached by her father, Brandon, and plays 8U softball for the Team Juiced, which plays in the Northwest Girls Softball League. She has been playing softball since she was 5 years old and plays pitcher, third base, shortstop and first base.

Mya is a very competitive person, she loves to compete in any type of competition, so her parents knew the MLB Pitch-Hit-Run competition was for her. Last year, at 7 years old, she took her first try at the competition. She won round 1, the local competition, and placed 3rd at the sectional competition.

This year, knowing what to expect and being one year older, Mya was ready to compete this spring.

Las Vegas is in the San Diego Padres market which includes all of Nevada and all of Southern California, south of Orange County. To make it to Round 3, you have to be the overall winner of Round 2 and have one of the top 3 scores of all sectional winners in the San Diego market.

Mya had the top score in the region and was invited to the Team championship round at Petco Park in San Diego on May 30th. Mya was excited to go and compete on a Major League field. She had an outstanding day on the diamond and won the San Diego Padres Team Championship. Mya was so excited to have won and that night we got to go to the Padres game where Mya and the other division winners were recognized on the filed before the game. At this point, her family felt like they had accomplished their goal that they set at the beginning of spring.

To make it to Round 4 and the National Finals, is very difficult and she had to wait 29 days before the National Finalists were announced. During those 29 days, other MLB Team Championships were held until all 30 MLB teams had crowned a champion. MLB then took the top 3 scores out of the 30 team champions and those 3 participants got to go to the National Finals in Cincinnati at the 2015 All-Star Game and compete on the field before the MLB Homerun Derby.

Waiting for 29 days was difficult but the day final came when they announced the finalists on National TV on the MLB network. As the Bartlett family sat in their living room watching the show when they announced Mya was one of the top 3 in the nation out of over 90,000 8-year old athletes and she was now a National Finalists.

This is were the real fun began for Mya and her family. Mya's family had a couple of weeks to get ready for the big trip. During that time she was interviewed by Channel 3 KSNV and Channel 13 KTVN and both channels did a very nice stories that they aired on several telecasts. Mya was on the radio and quickly started to enjoy the spot light. The Friday night before they left for Cincinnati, Mya threw out the first pitch at the Las Vegas 51's game and got to spend one last night with friends, family and teammates.

Finally it was time to go to Cincinnati, this was the first time she had been on an airplane and was just as thrilled for that experience. The four days they were in Cincinnati were packed with events and things to do every single second of each day. They family said it is hard to describe how much fun this was for them.

The highlight was probably being able to be on the field during the MLB Homerun Derby and shagging the balls that the players were hitting. One of her favorite players is Joc Pederson of the LA Dodgers and she was able to shag 3 of his balls in the final round of the competition. She was more tired running around the field during the Homerun Derby than she ever is after playing in softball games. This was a fantastic experience and one they will never forget. Mya finished in 2nd place in the Finals and did a very good job for being an 8 year old on such a grand stage. Just hours after it was all over, Mya turned to her dad and said, "let's do it again, San Diego 2016, here we come!"

Congratulations to Mya and Way to Represent Las Vegas and All of Southern Nevada! We look forward to seeing her out there next year!