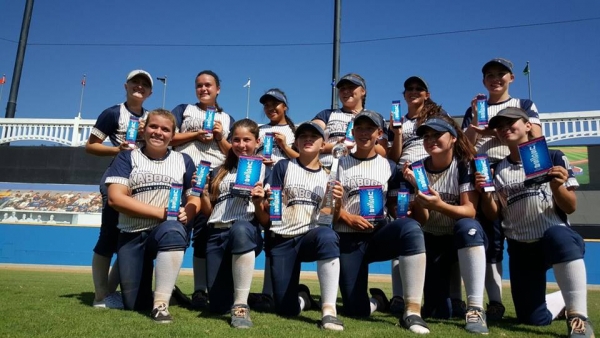 What an Incredible month of July for the 2001 fast pitch team of Kaboom Batting Academy (KBA 01)!

KBA 01 began the month in Irvine, Calif., with the Champions Cup, one of the nation’s top events annually for college coaches to attend and recruit prospective student athletes. KBA finished third out of 24 teams in the 14U division, falling to eventual champion Power Surge 4-3 in the semifinals.

The day following such a memorable run, three KBA players flew to Florida to compete in the inaugural USSSA USA Elite Select All American Games. Paige Sinicki played in the 11U Division for the Far West Region, while Meaghan McInerney (13U) competed for the Far West and Brynne Hilton (13U) the Atlantic Region. The event offered more proof Nevada has players capable of competing with some of the best talent nationally.

The highlight for July, however, was the USSSA National Championship tournament in West Covina, Calif.

KBA 01 began the week by winning the event’s photo contest, which had a theme of Stars and Stripes. But that wasn’t the only title the team was chasing.

The girls would win their pool with a 3-0 record, outscoring opponents 16-4.

As the week progressed, so did KBA’s dominance. KBA won its 14U national title in decisive manner, finishing the tournament with a 9-0 record — the only team among 40 not to drop a game all week. It defeated a very strong Firecrackers Manny squad 3-2 in the final.

The team was presented with its national championship trophy and all 12 players received individual awards.

This article was contributated to greatly by Chuck Sinicki.