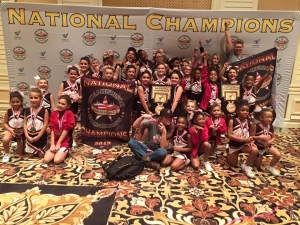 On Sunday December 13th the Lady Aces & the Little Lady Aces of the Las Vegas Aces Football Team competed in the American Grand  National Cheer competition at the Mirage events center. The tournament consisted of cheer squads from all over competing in various age ranges & skill levels. The Little Lady Aces ranged from ages 5-7 and took first place in their division with an energetic and fun routine! the older Lady Aces took the stage in true Lady Aces fashion with a high flying, stunt filled, dance routine that also earned them a first place title in their division. These girls have been working incredibly hard since August to prepare for their 2 minutes & 30 seconds of fame on the blue mat under those bright lights… and their hard-work paid off big time!

Check Out the Photos Below...

View the embedded image gallery online at:
https://www.lvsportz.com/news/item/1053-lv-aces-cheer-teams-win-national-championships.html?tmpl=component&print=1#sigProId6bcd703381
You are now being logged in using your Facebook credentials