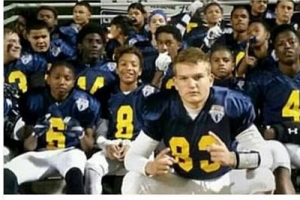 On Sunday December 13th, 2015 the FBU (Football University) 8th Grade Las Vegas team would secure one of four spots in the Football University's National Championship bracket. To make it this far, the team has had to play several very good teams over a two week period starting December 5th here in Las Vegas at Liberty HS where they beat Phoenix 27-6 in the 1st round and Utah 28-13 in the 2nd round on December 6th.

The team then advance to the Elite 8 West Coast Semi-Finals in San Leandro, CA where they would take on and a strong Los Angeles team and win 10-7 during round 3 on Saturday Dec. 12th. That put them in them in the West Coast Championship game (round 4) on Sunday Dec. 13th where they would have a slug fest with last years West Coast Champion Oregon. They were able to squeeze out a narrow last minute victory 29-27 in the final 3 1/2 minutes after trailing late in the final quarter.

Las Vegas was crowned the FBU West Region Champion, and will head to Naples, FL where the will meet with last years defending champion and this years Plains Region Champion - FBU North Texas. That game takes place on Saturday Dec. 19th, 2015.

The team only has few days before having to head out to Florida and is in serious need of finanical support. They have started a GoFundMe campaign which can be found here: https://www.gofundme.com/5uesc4jf . Every little bit helps and they have a big amount they need to raise in a very short amount of time...