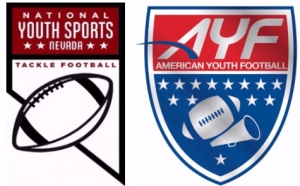 “We are incredibly excited to join American Youth Football. It’s an organization that has shown that they stand firm on their core values. Similarly, our rapid growth in Nevada has come from putting the student-athlete at the forefront in all we do. We’re proud to make this transition. This allows more opportunities for our teams locally to play on a national stage. At the end of the day we want to provide our athletes with the most opportunities possible in their skill development.” – NYS/AYF Nevada Senior Vice President, Justin Phelps

"AYF is proud to welcome AYF Nevada and the Las Vegas metro area to our family. AYF is the largest and best youth football and cheer organization in the world for one very simple reason -- we focus on what is in the best interest of children. Our foundational pillars are Safety, Character, Scholastic Excellence, Sportsmanship, and Full Participation. We know that AYF Nevada shares these values." – National Membership Chairman, American Youth Football, Shannon Shy

ABOUT AMERICAN YOUTH FOOTBALL:
AYF is the largest youth football community in the United States and the World. As a member of AYF, NYS Nevada is a part of an organization that is completely committed to the sport of youth football, to the people that dedicate their time and effort to ensuring that AYF players have a rewarding experience on the field and act as responsible individuals and leaders off the field.

American Youth Football, Inc. was established in 1996, and is a 501 C(3) non-profit international youth football organization established to promote the wholesome development of youth through their association with adult leaders in the sport of American football. Rules and regulations are established to ensure that players play in an atmosphere of safety with a competitive balance between teams. AYF is on a mission to GIVE BACK to the community. AYF believes that each of us can make a difference where we live and how we live. AYF believes that ALL kids deserve equal opportunities, special attention and respect. AYF's philosophy is to allow members to govern themselves and to remain non-intrusive to local operations while providing a support structure and services to maintain a strong, healthy and sustainable youth football & cheer program.

ABOUT NYS NEVADA FOOTBALL & CHEERLEADING:
NYS Nevada is the largest youth football league in the state of Nevada. NYS offers both 11 Man & 8 Man weighted & unweighted divisions. The 11 Man Tackle Football league is geared towards the more experienced and competitive tackle players. The 11 Man Division includes standings, scores, weekly updates, and a full playoff system with awards. Rules are established to help players prepare for high school football. The 8 Man Division is weighted and more instructional which does not generally include standings or playoffs. Rules are established to help players learn the game in a safe environment. Less players on the field and limited rosters promote playing time. Lastly, NYS Nevada also runs one of the largest NFL Flag Football programs in the area. This provides a variety of options for youth players of all skill levels who wish to play football.

NYS Cheerleading is a non-competitive recreation program for new and experienced cheerleaders, ages 5-15 years old. They take pride in focusing their organization around cooperation, self-confidence, respect, great friendships and all of the important foundations of cheerleading. They support the NYS Nevada Tackle football players by cheering at games and also participate in camps with UNLV Cheerleaders and an end-of-season showcase.