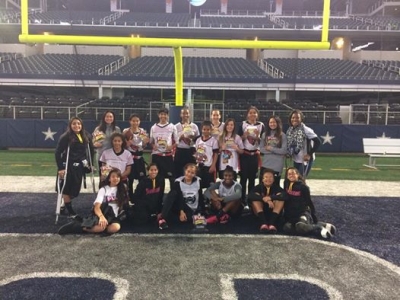 This past Saturday Boys and Girls ages 9 to 14 from around the country got to participate on a National Stage as they competed in USA Football's NFL Flag National Championships held inside Cowboys Stadium in Arlington, TX on Saturday February 8th, 2014.

To make it to the National Tournament of Champions each team must compete in and win one of eight regional tournaments held throughout the country. NFL teams hosting NFL FLAG powered by USA Football Regional Tournaments in 2013 included the Oakland Raiders, Arizona Cardinals, Baltimore Ravens, Cincinnati Bengals, Houston Texans, New Orleans Saints and New York Jets. The first of the eight regionals took place this summer in Austin, Texas.

Both the 702 Lady Cardinals and CES Lady Raiders have separate rosters of players but are coached by the same coaches and these coaches are no strangers when it comes to making it to the National Tournament of Champions. Since 2008 the coaches have coached local girls to win four Oakland Regionals and two Arizona regionals, making to the Nationals each year and winning the National Championship in 2010. Also joining the coaching ranks for this year was Gracie Garcia, a player from the 2010 National Championship team.

Last year the Lady Raiders represented the Arizona Cardinals in the 2013 Nationals that was held in New Orleans, LA but the team fell just short losing in the Championship game 0-6 to the Bengals.

This year the coaches and players were determined to bring home the National Title to Las Vegas. While the CES Lady Raiders and WASUP Chargers would fall short, the 702 Lady Cardinals could not be stopped and would go on to win the National Title.

Both girls teams arrived in Arlington Friday morning. Festivities included watching a tackle game between USA vs Canada. The tournament began Saturday morning. The Cardinals went into the playoff as a number 5 seed after going 2-1 in pool play. In pool play they defeated the team representing the New Orleans Saints. The next game was against the number 1 seed Bengals who defeated the Lady Raiders team and was also last years National Champions. They went into that game behind at halftime but came back with a long range passing attack coming out victorious. The championship game featured the 702 Lady Cardinals vs the Dallas Cowboys (the team that defeated them earlier in pool play). The Lady Cardinals defeated the cowboys 32-14 to become the 2014 National Champions. It was a team effort all around. Both teams, the Raiders and Cardinals supported each other throughout the tournament. Coach Gerry Garcia stated "The teams motto of 1 team 1 family 1 mission 1 heart prevailed during the tournament. It was an awesome experience for these young ladies."

We would like to congratulate all teams in winning their perspective regional titles and the 702 Lady Cardinals in winning the National Title. Way to represent Las Vegas on a National Stage!