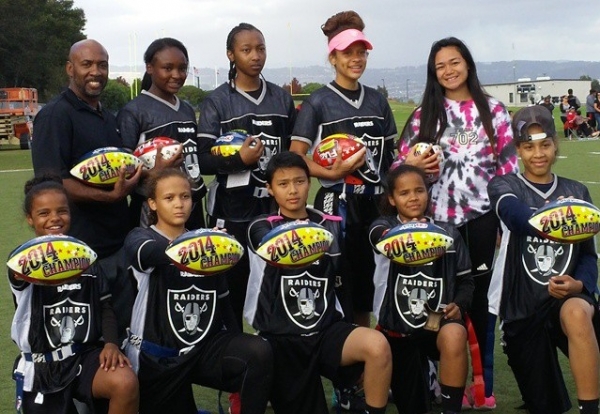 On Saturday October 25th, 2014 NFL Flag teams from around the West Coast went head to head at the the Oakland Raiders Training Facility in Oakland, Ca for the NFL Flag Football Oakland Regional Tournament with hopes of playing for a National Title this January in Arizona.

Inlcuded in those teams were two girls NFL Flag teams from Southern Nevada and they both would meet head to head in the 13/14 Girls Championship game:

Girls Division 13-14 year olds. Six teams split in two pools with 3 teams in each pool. After pool play teams are seeded for playoffs with the number one and two seeds gaining a bye in the first round of playoff games.

The CES Lady Saints lost first game 14-12 to Watsonville and then win Second game 33-0 over Merryhill
Lady Saints would take the 3rd seed going into playoffs.

The 702 Lady Raiders won first game 29-0 over San Carlos and then won Second game 38-6 over Watsonville. Lady Raiders took the number one seed going into playoff with first round bye.

Playoffs
The CES Lady Saints won first round game 28-0 over Merryhill and then won second round game 12-7 over Watsonville Bengals.

The 702 Lady Raiders won Second round game 32-0 over Watsonville Ravens.

The 702 Lady Raiders will be looking to defend their 2014 National Title as well as win their 3rd overall National Championship!