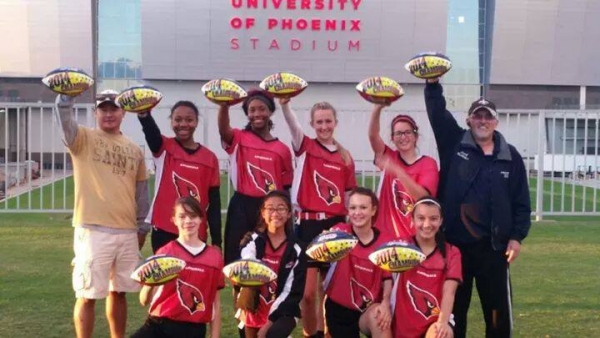 Not to be deterred after their lost to the 702 Lady Raiders in Oakland back in October, the Coach Ed Smith Lady Saint's would head to Phoenix, Arizona for final Regional Qualifying Event on Saturday December 13th, 2014.

The Arizona Cardinals Lady Saints went undefeated on for the day and would up winning the Championship 7-6 after coming from behind and scoring the tying TD and winning Xpt with under 1 min remaining in the Championship game after having 2 earlier TDs called back on penalties.

Head Coach Sheldon Scott McArthur said, "Due to the start of the High School Flag Season, we only held 2 practices the last month before the regional so we were a little rusty. The girls played with tremendous heart and everyone contributed at key points in all the games. The Ladies are looking forward to the challenges upcoming with competing on the National Level."

They now join the 702 Lady Raiders this January 2015 in Phoenix, Az for the NFL Flag National Tournament of Champions.

Congrats Ladies and Good Luck to Both Teams!

Published in News & Announcements
Tagged under
More in this category: « Lady Pumas 12u - 14u Softball Travel/Club Ball Tryouts Las Vegas 49ers Youth Football Team Looking for Players for Spring 2015 »
back to top