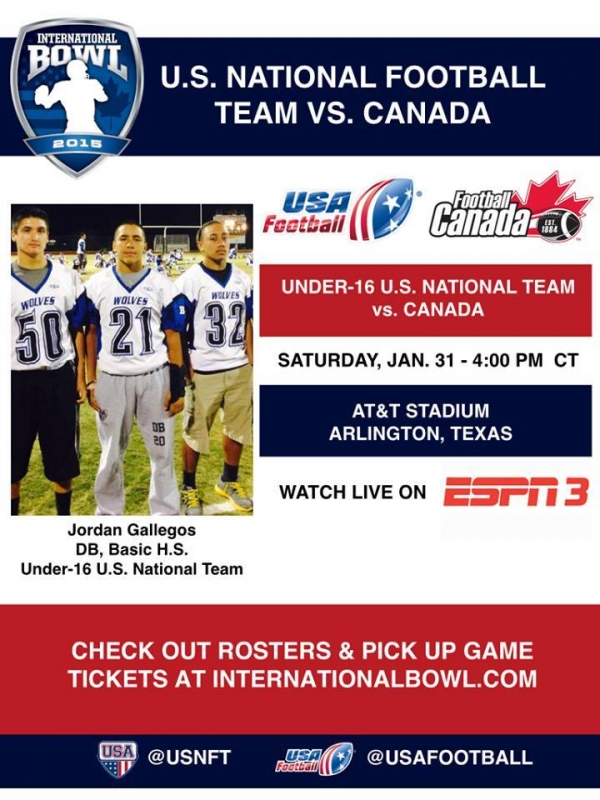 Jordan A. Gallegos of Henderson, NV and Basic High School has been selected to play on the 2015 U.S. Under-16 National Team, assembled by USA Football. The team will compete in January in the sixth annual International Bowl against Canadian national teams at AT&T Stadium, home of the Dallas Cowboys, in Arlington, Texas.

The United States will field teams at the Under-15, Under-16, Under-17, Under-18 and Under-19 levels during the event. Players will practice for a week before competing in a series of jamborees and official international games. The Under-18 team will play Friday, Jan. 30 with the three youngest squads taking the field Saturday, Jan. 31 – all at AT&T Stadium. The Under-19 team plays Saturday, Feb. 7 at the University of Texas-Arlington’s Maverick Stadium.

A national team exemption granted by the National Federation of State High School Associations and NCAA allows high school players to compete for USA Football and not have their participation count as an all-star game appearance. Because the International Bowl is recognized as a national team competition, the NCAA also allows current college coaches to serve on national team staffs.